JOSEPH Stiglitz and Paul Krugman are both internationally acclaimed and Nobel Prizewinning economists. Each has advanced robust critiques against austerity. Promoting his book, The Great Divide, in London recently, Stiglitz said bluntly that austerity doesn’t work and had been bad for the Irish economy.
Both Stiglitz and Krugman (and other renowned economic thinkers, including Yanis Varoufakis, the Greek Finance Minister) are providing an important counter to the argument that austerity is the only way to repair economies in the aftermath of the financial crisis. They also dispute a narrative, camouflaged in the rhetoric of ‘realpolitik’,that the economic pain is unavoidable and should be accepted.
David Cameron’s new Tory Government is seized with an ideological worldview of how politics, society and the economy must be
organised. They have made austerity central to achieving their aims.
Other elements of this Tory agenda include:

● An intention to increase military spending (including a proposal to spend over £20billion on the Trident nuclear missile system, whilst simultaneously cutting over £25billion from public expenditure between 2015 and 2017);
● A plan to dismantle human rights legislation;
● An intention to introduce anti-trade union measures;
● An ill-conceived referendum on an exit from the EU.

Cameron’s new Cabinet is an exclusively neo-Thatcherite government dedicated to less state intervention, an end to the welfare state, and unprecedented levels of political authoritarianism in Britain.
All of that has very serious ramifications for the Six Counties.
Cameron’s previous government started to disengage from the Northern political process from 2010. It became increasingly partisan and negative in its interventions. The Tory-led coalition also introduced policies which cut the North’s public expenditure settlement (or Block Grant) by £1.5billion and unleashed the austerity crisis now gripping the regional economy.
British Tory political and economic policy towards the North is the context against which the DUP’s welfare legislation has been blocked twice by Sinn Féin, SDLP and the Green Party. The ongoing welfare impasse is one manifestation of this much wider austerity crisis.
During the last three weeks, DUP representatives have tried to argue that continued opposition to their welfare
legislation will create a “black hole” in the local economy. That completely ignores and distracts from the fact that a “black hole” of £1.5billion already exists.
That is the reality which has already been driving down living standards in the North (already the lowest in the British state and 26 Counties), entrenching public sector wage restraint, increasing dependency upon food banks; and further decimating already hard pressed health, education, training, higher education, and other key public services.
The threats now being issued that failure to pass the legislation could lead to senior civil servants taking control of departmental budgets and that welfare powers should be handed back to Westminster have been further exacerbated by Secretary of State Theresa Villiers’s public statement in May raising the prospect of Westminster “action”.
The biggest threat to the political process during the last five years has been the
approach of the British Government.
As a result of the austerity crisis created by the previous Tory/LibDem coalition and the announcement that worse is to come, the potential now exists for an unprecedented political crisis to engulf the political institutions and the process itself. The new Tory Government’s unyielding ideological crusade is the main negative dynamic pushing the North gradually towards that outcome.
This British Government needs to change its approach to the North. The political institutions established under the
Good Friday Agreement (GFA) were intended to embed the Peace Process and take forward economic and social reconstruction and regeneration. They must not be reduced to instruments for imposing policies which will mean more economic inequality and hardship.
It appears that the Tory ideologues now in government and their commitment to austerity are set on a direct collision with the entire basis of the Good Friday Agreement. That should be a cause of alarm for all those who have supported the Good Friday Agreement and subsequent Agreements – North and South and internationally.
British Government policy has taken the political process for granted. Its role in contributing to political instability and the emergent austerity crisis is a total anathema to all democrats.
Tory candidates who stood for election in the Six Counties at the last election received a derisory vote. This Tory Government has no mandate for its policies in the North of Ireland.
A defining period is opening up for the political process and the economy in the North. Each must be reenergised with substantial positive investment not pushed into a negative downward spiral. Progressive leadership and initiative will be required both in Ireland and internationally to ensure there is forward momentum. 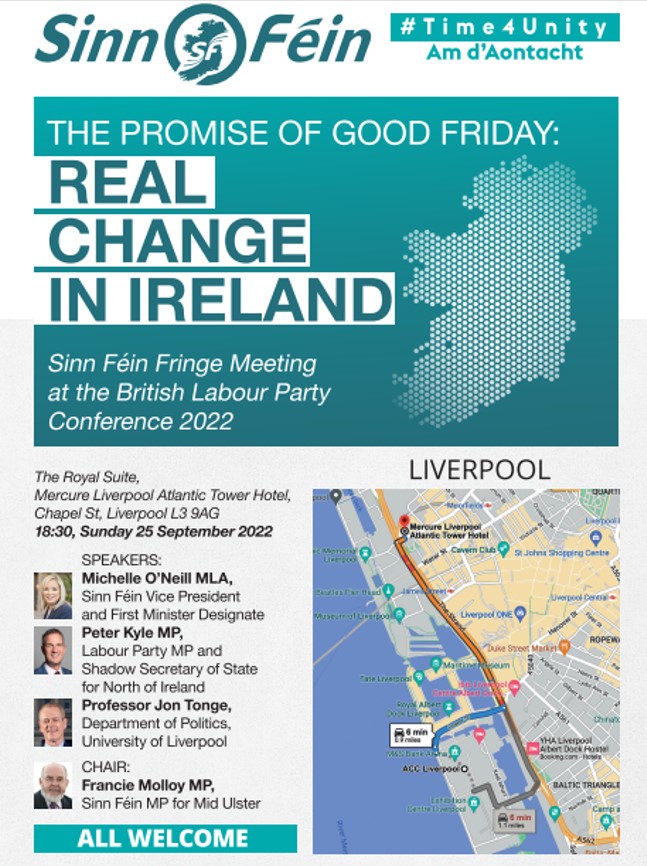