Over 400 people gathered in a packed London Irish Centre on 19 October for the ‘Towards a New Ireland – a new phase of the peace process’ conference, hosted by Sinn Féin.

Speeches from the conference can be found here.

The aim of the conference was to provide a platform and forum for discussion on the next steps in Ireland north and south, some 15 years on from the Good Friday Agreement, and in the relationship between Britain and Ireland. The backdrop to the discussion was both the ongoing political difficulties in the north, from the recent flag protests to the fairly negative – or at best, disengaged and ill-judged – role of the current British government. It was also in the context of ongoing economic austerity and crisis in both Ireland and Britain, and the political impact and alternatives to that, and if and why a future united Ireland would be part of the solution.

With an unprecedentedly wide range of speakers, the conference proved a big success and ensured that the issue of Ireland remains on the political agenda in Britain. With an audience overwhelmingly drawn from first, second, third and beyond generation Irish people from across England, Scotland and Wales, alongside progressive Labour movement and campaigning activists, the conference reflected a lively and wide ranging discussion throughout the day. With interest in key political issues for Ireland north and south dominated in equal measure, people raised questions about the peace process, issues of reconciliation and dealing with the past, the need for a border poll, the necessity to press ahead with issues such as a Bill of Rights and concerns about how to overcome division and sectarianism. The conference also focused on social and economic issues, with many particularly younger people raising their primary concerns about the dire economic circumstances forcing many of them to leave Ireland, and why that relates or is connected to the issue of a united Ireland. The challenges for the Irish diapsora and in particular the demand for the right of Irish citizens abroad to vote at home, was also a huge issue at the conference.

Giving welcome remarks at the start, London Irish Centre Chief Executive David Barlow spoke as an English-born Irishman about the advantages and contradictions of having a dual identity. Speaking about the impact of emigration and poverty on Irish migrants, he said that some 5,000 vulnerable Irish people were dealt with at the Centre with some thousands each year receiving some help and assistance.

Chairing the opening session, Daily Mirror Chief Executive Kevin Maguire put the discussion in the framework of ‘where now, some 15 years on from the Good Friday Agreement?’

Sinn Féin President Gerry Adams gave the opening address to the conference, beginning with a reminder that it was the 25th Anniversary of the introduction of the broadcasting ban against Sinn Féin. He underlined Sinn Féin’s core beliefs of social and economic equality and that ‘we must cherish all children of the nation equally, regardless of poverty, disability or sexuality’.

He said that the situation in the north ‘has changed out of all recognition’ for the better and that the Agreement had ‘created a new dynamic, a new political dispensation’. Despite this, there remained those who were ‘resistant to change’ most recently seen in ‘months of organised sectarian violence on the streets of Belfast’. Unionist leaders had, he said ‘failed to stand up to this at a time when decisive positive leadership may have made a real difference’. Sinn Féin were, he said ‘committed to building a new society and achieving a new Ireland that is representative of all the people of our island. That includes the unionists’. He said the new Ireland must be `representative and inclusive of all’. He said that the root of sectarianism in Irish politics ‘was British involvement in Irish affairs’, a sentiment echoed by other speakers throughout the day.

He also urged the British and Irish governments to set a date for a border poll, which would ‘provide an opportunity to focus on the future; to build a modern, dynamic new Ireland in which there is genuine reconciliation and a more equitable society.’

On the diaspora he said the recent decision by the Constitutional Convention to recommend that Irish citizens in the north and overseas can vote in Presidential elections was a positive development which should be implemented. He urged everyone ‘to join with us in this great historic task of building a new Ireland that this new phase of the peace process is opening up.’

Among other speakers were former Downing Street Chief of Staff, and key player in the development of the peace process, Jonathan Powell. He said that the impact of the peace process in Ireland and the Good Friday Agreement was still being felt around the world today and paid tribute to all of the political parties and leaderships involved.

John McAllister, Deputy Leader of NI21, said that with a ‘pro-Union member of the Northern Ireland Assembly addressing a Sinn Féin conference in London, times have indeed changed’.

He argued that people already lived in the new Ireland which was ‘no longer live on an island scarred by conflict’ and there was no more ‘undisguised hostility between Dublin and Belfast’. He said it was a New Ireland ‘in which shared interests produce close co-operation between Belfast and Dublin’. But he argued against a Border poll, which he said, there was not support for and that ‘the will of the people, North and South, has been given clear expression’. He said the ‘perception outside of the republican constituency is that the border poll campaign, and the continued inability to speak of ‘Northern Ireland’ is suggestive of a lack of vision on the part of Sinn Féin when it comes to the political challenge facing us over the next generation’.

Former Labour MEP Nessa Childers argued that ‘Good Friday is not the terminus of peace and normality. It is a bus stop on the road’. She called for a new multi-party agreement ‘linked to a new inter-governmental treaty’.

Labour MP Diane Abbott argued that British colonial policies had left a destructive legacy throughout the world, and that ‘colonial borders serve colonialists, not the people of those countries’. She also expressed hope that the new Ireland would address issues of women’s rights – in particular reproductive rights.

ICTU General Secretary John Douglas raised issues of social and economic justice for the new Ireland, drawing parallels with the struggle 100 years ago of the Dublin Lock Out, and the need to take on injustices today, such as the need for a living wage, which would benefit the whole community. He brought solidarity greetings to British postal workers, well received by CWU Ireland General Secretary Cormac O Dalaigh, who spoke in a separate session, and union general Secretary Billy Hayes, who attended in the audience.

Seminar sessions in the afternoon were also packed and developed a number of themes. On the Economy, chaired by Sinn Féin Councillor Rose Conway Walsh, Sinn Féin MP Conor Murphy developed the arguments around the economic benefits of a united Ireland, which would be free to develop without the constraints of British involvement, and could, as a united entity, develop its own sovereign, all-Ireland policies, to invest and operate on a world scale in a truly independent fashion. A new united Ireland should, he argued, have a progressive economic policy, based on equality, investment to stimulate growth, protection and development of welfare, health and educational needs for all and would end the waste of a dual economic system on one small island.

Economist Michael Burke argued that it was in the interests of all those in the north – including the unionist community – to have a united Ireland, which could operate and develop much better than a six-county state, which remained a colonial entity. Labour Irish Society vice-chair Christine Quigley spoke of the devastating consequences of austerity on young people in particular and the need to address this – whether as a united Ireland or with the status quo.

In the discussion, concern about tackling the dire effects of austerity and the driving down of living standards was a key issue, and whether and how a united Ireland could resolve this issue which was a pressing concern for people’s every day lives.

For a Democratic Ireland – and Island of equals had an equally impressive array of speakers including Sinn Féin Senator Kathryn Reilly, who explained Sinn Féin’s approach for a New Ireland, based on equality, social justice and rights for all. She was joined by Patrick Yu, Chief Executive of NICEM (Northern Ireland Council for Ethnic Minorities) who, among other issues, raised the urgent need for a Bill of Rights. Cormac O’ Dalaigh from CWU Ireland spoke about the need for workers rights and why they were integral to building a better society and Prof Marianne Elliot, head of Irish Studies at Liverpool University, who addressed the crucial issue of dealing with sectarianism. NUS Black Student officer, Aaron Kiely, was in the chair, and spoke of his own Celtic-Caribbean heritage and the need for solidarity between peoples against discrimination and racism.

Changes and Challenges for the diaspora was the third seminar, which was particularly well-attended and with a big focus on the issue of votes for the Irish abroad at home in Ireland. Chaired by Anni Marjoram, former advisor to Ken Livingstone as Mayor, the session heard from Dr Mary Hickman who founded the Irish Studies Centre at London Met University and had let the campaign around the votes issue. Sinn Féin MP Francie Molloy and Jennie McShannon, chief Executive of Irish in Britain (Federation of Irish Societies) completed the panel.

In the final session Colin Parry made a moving and inspiring speech, and received a huge round of applause, speaking of how he established the Peace Centre in memory of his son Tim Parry and Johnathan Ball, who died in the IRA bomb at Warrington. Baroness Angela Smith, former British Labour government under-minister for the north, spoke of the vital need for reconciliation for the peace process to go forward.

Labour MP and campaigner Jeremy Corbyn spoke of the need for solidarity between all economic migrants in Britain, all of whom were there because of economic injustices at home. He also paid tribute, to warm applause, to the work done over decades for human rights and justice by Gareth Peirce, who was in the audience participating in the conference.

Former Assembly Deputy speaker and women’s coalition MLA Jane Morrice also spoke to the meeting on her own experiences and writer Roy Greenslade were also on the panel. Roy Greenslade spoke of the role of the British state in relation to collusion. Refering to the publication of Anne Cadwallader’s book ‘Lethal Allies: British collusion in Ireland’ which he said was ‘a revealing and forensic insight into the nature of collaboration between loyalist paramilitaries – the death squads – and shadowy agencies of the British state’. He said the British national press and broadcasters had been falsely ‘locked into a narrative about Northern Ireland that eschews all deviations from one that harks back to the late 1960s’ and was ‘the one about the two-tribes, with the poor British government cast as the reluctant, impartial, despairing piggy-in-the-middle’. He said that despite the changes wrought by the peace process, ‘the only story the media care to tell is always about conflict’. He said that publishers and editors had to be ‘embarrassed’ into living up to their obligations of upholding a free press in relation to reporting Ireland.

Michelle Gildernew MP in the chair, and Paul Maskey MP in his closing remarks, thanked everyone who had participated and said that Sinn Féin would be continuing to step up its engagement in Britain with future initiatives to continue the discussion and urged people to remain involved in the discussion around the new Ireland and to keep up the pressure on the British to be held to account for its obligations and actions. 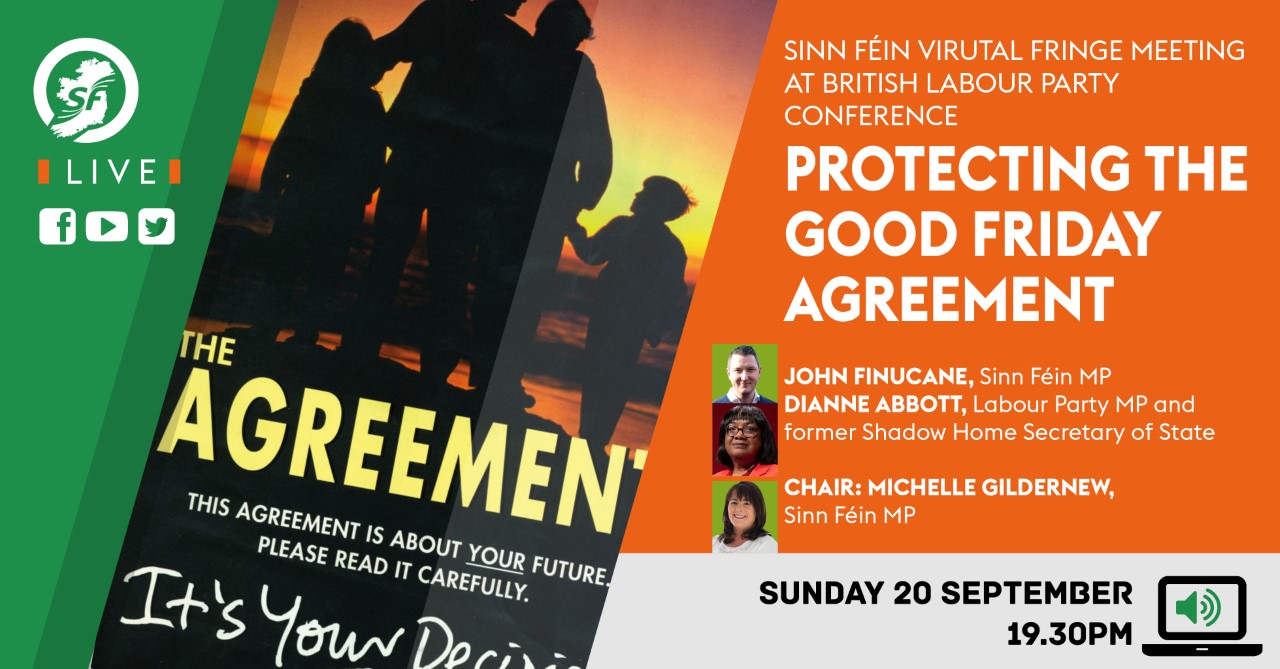