Sinn Féin wants to `lead the next Government’

On 14 February Sinn Féin President Gerry Adams TD was in Cork at one of a series of general election campaign launches.
Deputy Adams said that Sinn Féin `will make no promises we will not keep’. He said Sinn Fein were `the only party going into the upcoming election with a fully costed plan to deliver a universal healthcare system that treats citizens with the dignity and respect they deserve’. He added that the party also had a `costed plan to deliver 100,000 new homes’ and were `the only serious political party to give a commitment that we will abolish water charges and the local property tax’.
He added that `under the leadership of Martin McGuinness, Sinn Féin is in Government in the North where we are promoting partnership, reconciliation, equality and inclusion’. Sinn Fein were `defending the rights of citizens, protecting the most vulnerable and building prosperity and jobs’ and wanted to `be in Government in this part of the island as well’.
He concluded: `the time has come to elect a progressive republican Government led by Sinn Féin that will deliver a society based on equality and fairness, and build a Fair Recovery for all.’

This week Sinn Féin produced a billboard in advance of Saturday’s state-wide local Right2Water demonstrations. Gerry Adams TD urged citizens to join the protest and reiterated Sinn Fein’s commitment to `abolishing water charges, ending the current metering project and redirecting remaining funding into direct investment in water infrastructure. Our water supply must be kept in public ownership’.
He said water was a `human right’, adding `while water services must be paid for, this must not be done through a double tax on hard pressed citizens’. He said that Irish Water was `mired in scandal’ and was `a toxic entity, which has become synonymous with everything that is wrong with this Government, namely, cronyism, political manipulation of State boards, threats to citizens and escalating taxes on struggling families’. It `cannot be left with responsibility for the delivery of water services in this State’, Mr Adams said.
He said only a Sinn Féin-led government would abolish the charges and was `committed to holding a referendum to ensure that the public ownership of our water services is enshrined in the Constitution’.

Legacy of 1916 belongs to every citizen
On 21 January Sinn Fein councillor Sarah Holland described the `welcome conversations’ taking place on doorsteps around the country on the legacy of 1916.
She said people were `embracing the celebrations and re-enactments of this centenary year of commemorations, which belong to the people of Ireland’ and the party was `hearing stories of relatives who fought in 1916, and we are delighted to be having these conversations’.
However, she said that the idea, enshrined in the 1916 Proclamation of `cherishing all of the children of this nation equally’ was `shamefully lacking’ in the policy and practices of the current Dublin government.
Cllr Holland went on to say that `no one party or group owns these celebrations – the people do’, but added `given the Government’s sad lack of planning last year, and its determination to dilute the sentiments of the Rising, we are not surprised that it is attacking Sinn Féin’.
Sinn Féin had `commemorated the Rising every year’ and were `proud to do so’. She ended by encouraging ` every other party to do so and not allow Ireland’s history to be whitewashed over.’

BREXIT `would have serious implications for Ireland’ 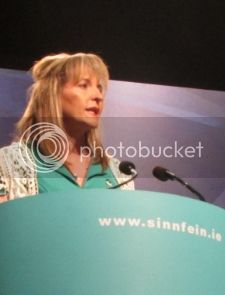 On 21 January Sinn Féin MEP Martina Anderson announced details of a major conference she will be hosting in Belfast at the end of February on the implications of `BREXIT’ for Ireland. She said that partial disengagement or even full withdrawal by the British state from the EU (and formal repeal or significant erosion of human rights protections) would have hugely negative implications for Ireland, North and South.
Martina Anderson said that issues including the Peace Process, human rights protections, agriculture, jobs, infrastructure and energy, cross-Border trade and travel `would be directly affected by a BREXIT’.
She it could also see `the re-emergence of passport checkpoints and customs controls along the border, hindering free movement and disrupting the lives of nearly a million people living in the Border region’.
She said `It would mean no more Single Farm Payment or Rural Development Fund, no Structural Funds, and no PEACE Funding, with high human, social and economic costs. It is highly unlikely that the British government would be willing to replace the direct funding currently received from the EU which between 2007/13 was worth £2.4billion to the North.’
However, she added `Europe does need serious and radical democratic reform but Sinn Féin believes this should be achieved through increased accountability and transparency of the European institutions. So while there is no question that the North of Ireland would be hardest-hit by a Brexit with huge setbacks for political and economic progress and continued democratic transformation, the adverse effects would be felt across every aspect of trade throughout the island.’
She said the full implications would be discussed at the conference ‘BREXIT’- Rights and Wrongs, at the Balmoral Hotel Belfast on Friday 29 January. A range of speakers will comment from differing perspectives.

Week in Review is circulated by Sinn Fein MPs. Visit www.sinnfein.ie or follow us on twitter @sinnfeinireland