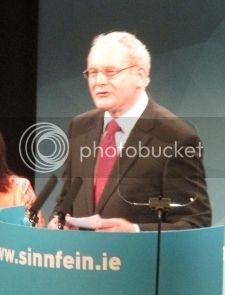 This week we are facing into a building crisis in the political institutions in the North.
The immediate difficulties we are facing into have been triggered by the DUP’s decision to bring forward a welfare bill to the Assembly, which does not implement the protections agreed at Stormont House for children with disabilities, adults with severe disabilities, the long-term sick and large families.
It appears that the DUP is responding to pressure and demands from the Tories in London. In my view that is a major tactical error.
However, the crisis we are facing is not of the making of the parties in the Executive.
The crisis has been created by the austerity cuts agenda of a Tory administration in London, which is attempting to decimate our public services and punish the most vulnerable people in society.
Sinn Féin stood in the recent elections against Tory austerity and for social justice and equality. Our approach was mandated by over 176,000 voters, almost 25 per cent of the popular vote
In contrast the Tories received only 9,000 votes in the north, just over one per cent of the vote. This is a party, which doesn’t have a single Assembly or local council seat. They have no democratic mandate for their austerity policies in the north of Ireland.
Yet they have already taken £1.5 billion from the Executive’s block grant. And Cameron’s cabinet of Tory millionaires have announced plans for further eye-watering cuts of £25 billion to our public services and to welfare protections for people with disabilities, the long-term sick and large families.
These new cuts are set to begin almost immediately and they will devastate our core public services.
In meetings last week I challenged the British Secretary of State Theresa Villiers on two occasions for a breakdown on how the proposed £12bn cut to welfare and £13bn cut to public services would impact on the people of the North.
She refused point blank to tell me despite indications the Tories are even prepared to tax Executive top-up payments for the most vulnerable.
That is unacceptable to Sinn Féin.
We made it very clear in our election manifesto that the Executive needs a viable budget for frontline public services and welfare protections for the most vulnerable.
Sinn Féin will not support a welfare bill, which does not contain those protections and we will not be part of any agenda, which punishes the poor and dismantles public services.
In my view the measure of any society is how it treats those most in need and those most vulnerable.
In the face of such devastating Tory cuts our public services, our welfare system, our departments and the Executive itself is not sustainable.
None of the Executive parties stood on a platform of implementing these Tory cuts and Sinn Féin will not abandon children with disabilities, adults with severe disabilities, families with children and the long-term sick.
Sinn Féin has moved a Petition of Concern to stop the passage of the Welfare Bill this week. The SDLP has now supported our position.
I urge the DUP to withdraw the bill and re-engage in the negotiations to achieve the implementation of the welfare protections agreed at Stormont House.
It has always been my view that the outstanding issues in the welfare bill can be resolved, but this requires political will, particularly on the part of the unionist parties to protect the most vulnerable.
But make no mistake about it the biggest threat to our political institutions remains the ongoing Tory austerity agenda of cuts to our public services and the welfare state.
This is a time when the Executive parties need to stand together to defend our public services particularly in health, education and welfare. We need to stand up for the people who elect us, rather than acting in the interests of a Tory elite.
We need an immediate negotiation with the British government for a budget, which protects our public services and for fiscal powers that give us control over our economy.
We are not alone in this battle against austerity. The Scottish Executive has already requested a tripartite meeting of the representatives of the Scottish, Welsh and local Assemblies.
We should be taking this offer up and developing a common position within the Executive and with the Scottish and Welsh Assemblies in opposition to Tory austerity.